Hi All! Wow, what a day I had yesterday with my two boys at The Creative Craft Show at Eventcity in Manchester.

Armed with my newly sewn Tilly and the Buttons Bobbi Pinafore and Deer and Doe Airelle Blouse and not forgetting with a few pins too.

Our journey started at 7:48 where we travelled by train and only swapping trains at Doncaster and thankfully no delays so we got into the city centre for 10:10.

Of course the eldest was still hungry even after demolishing 2 cinnamon swirls so thankfully we had 20 mins spare so stopped at Subway where he had Nacho’s… Yes he had them before 9am!

We made to Piccadilly Gardens in time for the 250 bus that would get us to Trafford Centre for 11 where a free shuttle bus was available for those attending the show which was really nice.

The Kendall’s have arrived!

I booked into the organisers office with my Blogger Ambassador lanyard and had a nice chat to Terri from the ICHF team before we entered.

We dropped off our coats off at the cloakroom (£1 per item) which I didn’t mind to pay as it was already warm in the centre and didn’t want excess baggage ?.

Before we attacked the show, we decided to have our lunch first… Yes my boys like to have fun whilst eating!

We made our way back to the entrance and started our way round the show.

There was some great exhibitions and stalls.

Here’s a few purchases that I made whilst I was there:

1.5m of this lush lemon print and 2.5m of black polycotton from Prettiful fabrics. They had a fabulous range on offer, im surprised that I only came away with these!!

I wanted to find the perfect complimentary fabric to match the black polycotton as it destined to The Rowan Shirt by Wendy Ward… The shirt I’ve been promising the hubby since goodness knows when… Oops! But the owners at Fletcher’s Patch were great (family run business) and were patient with me and found lots of fabrics to go with it and finally made my decision on this one by timeless treasures.

I came across these lovely laminated fabrics at Sewing-Sanctuary and chatted to the owners who were lovely. I just couldn’t decide which fabric I wanted to make into the Squiffy Sling so I came away with a make up bag kit and a couple of zips as the kit makes 2! Win win!

I needed some buttons for his shirt and ribbon to go with the make-up bag kit and  came across Haberdashery & more and would you believe it was only £1.37 for 8 buttons and 2m  of polka dot ribbon. Who doesn’t love a bargain?!

As the boys were behaving so well, I said they could attend the workshop at J P Crafts aka The Craft Dookit where they could make a keyring or fridge magnet. John and Lisa who own J P Crafts were fantastic. I was unsure how Rhys would get on with the workshop but John was great and showed them how to make them and after some time lol Ethan chose a emoiji keyring and Rhys went for a penguin fridge magnet.

To be honest this is the first time in a while where both of them enjoyed an activity together! We wasn’t rushed at all and it was great to have a chat and banter with John and Lisa and my boys really enjoyed the workshop where I purchase 2 more kits for them both and kit for myself!

It was great to see my boys actually not on an electronic device (don’t know about anyone else’s kiddies but mine are always glued!) as we was travelling back home we had a pitstop at Costa where they wanted to make a start on one of them already and continued on the train home.

Just to share if anyone in the future is travelling to Eventcity get off at Barton Dock Road Bus stop as it is just across the road instead of waiting for the shuttle bus as it wasn’t there when we came out and saved a 15 min walk through Trafford centre too as we was shattered so it saved time and our legs.

The Creative Craft Show is well worth a visit for all types of makers and it was great to get a chance to dabble with crafts you wouldn’t know about. The next Event is at Glassgow between 5th-8th of March 2020 at SEC Centre.

If you have any questions about it feel free to get in touch. 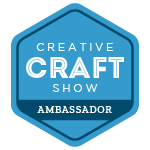 Now what do we have here then folks?! It's only a

Happy Sunday folks! Say what?! I've got a new blo

@felicity.fabrics have shared another sneak peek a

Woo hoo completed week 1 of @couch_5k and both son